SNJ Today is a company devoted to being the leader of innovative storytelling. We simply tell the stories that need to be told. Plus, we’re committed to telling the stories that make southern New Jersey a great place to live, work and play.

POP FM is the new name for the radio division of media company SNJ Today, LLC. POP FM’s parent radio station is WSNJ (1240-AM) and began broadcasting in Bridgeton, New Jersey in August 1937. Not much had changed on the station until new owner, Ken Pustizzi, purchased the radio station in February 2014. Local content became the focus for this small-town AM radio station.

In June 2016, WSNJ added its first FM translator broadcasting from the same tower in Bridgeton. The first FM station was broadcast on 99.9 FM and covered Cumberland and Salem counties. This expansion allowed WSNJ to catapult in the 21st century and begin to make a name for itself on the FM dial.

In June 2020, WSNJ changed the name of the radio station to POP FM and shortly following that, moved the 99.9 FM transmitter to a much taller tower located in Swedesboro, NJ. This expanded the 99.9 FM signal to cover nearly 4x the population and gain new listeners in Gloucester and Salem counties, as well as parts of Delaware.

The name change to POP FM was significant for the station. POP FM stands for Power of Positivity and continues the branding that POP FM believes there are more good people doing good things than bad people doing bad things. POP FM highlights all the positive people and covers local news, weather, and events in its coverage area.

In July 2021, POP FM added its second FM translator to the mix, broadcasting on 105.7 FM from the main studio offices in Millville, NJ. This frequency services the Millville/Vineland area for residents that may not receive a clear signal of 99.9 FM. 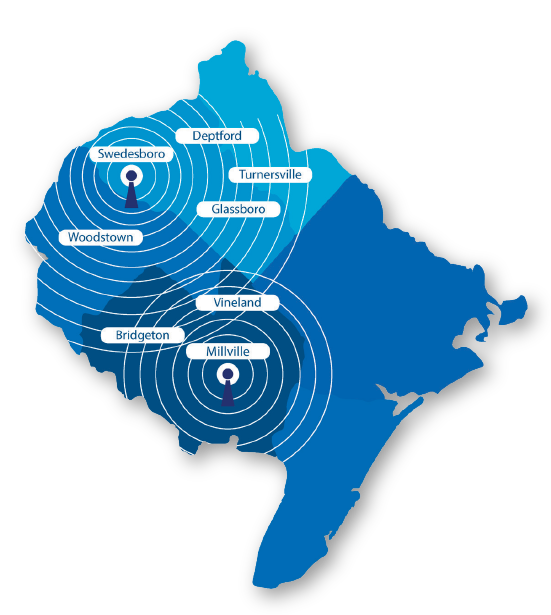